A Couple of New Church Perspectives on May 21st

First, here's a little snippet from the Nunc Licet Bible Study, where Rev. Jonathan Rose explained briefly (before May 21st) why the end of the world wouldn't happen on May 21st. (Over 5000 views so far - not bad!)

And then here's another great video from Curtis Childs. This one is about the desire to to say, "Ha ha! I told you so!" to the people whose predictions about May 21st didn't come true. Honestly, you should just subscribe to his channel (offTheLeftEye) already.

Posted by Malcolm at 2:45 PM No comments:

Back in March of last year I first heard from Brian David about a concept for a New Church Bible study website that he was working on with a couple of other people. One of the early experiments with the concept from around that time was internalword.com.

The project has now had a lot more thought put into it and they've done some presentations to try to get funding for it. And so now, rather than have me try to explain the concept behind the site, I can just tell you to watch the fun, short, RSA Animate-Style video that they put together.

You can also find a bunch of documents about the project on PittsburghNewChurch.org, including some images of what the user interface might look like. A note about those images: they look like a bad site from the 90s but, never fear, Brian assures me that they were just to try to explain the concept and, when they make the site for real, they'll get professional design and UI help.

Anyway, I think it's a cool idea and I hope that they get the funding that they're looking for so that they can give it a try. It's definitely one of those projects that will only work if a lot of people get involved so, if it sounds interesting to you, be sure to like the New Christian Bible Study page on Facebook.

P.S. They also entered into the debate that Rob Bell's book has stirred up with a little video about the New Church idea of heaven and hell.

The Bryn Athyn Cathedral has been streaming audio from their services for years. Now they're also offering live video streaming, using USTREAM.

You can find more information about their audio and video streaming options on the Live Services page of the Bryn Athyn Church website.

I haven't actually tried it out during a service but I have taken a look at the archives on Bryn Athyn Cathedral's USTREAM channel and I was impressed by the quality of the video. I was expecting it to be one badly positioned webcam, streaming grainy footage but, it looks like they've got at least 2 cameras that are well positioned to give pleasant shots of the service and the footage isn't too grainy, even in fullscreen mode.

Let me know if you've tried streaming a service live. 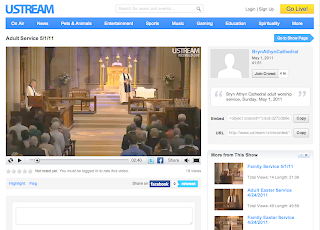 Posted by Malcolm at 9:47 PM No comments: