May Our Hearts Burn Within Us

I didn't make it to the adult service at the Cathedral on Sunday but I heard from at least 3 people that Rev. George McCurdy gave a great sermon. I listened to it this afternoon and it was well worth the time.

The title of the sermon is "May Our Hearts Burn Within Us", which is a reference to the story of the road to Emmaus (Luke 24:13-35). In the story, "beginning at Moses and all the Prophets" the Lord "expounded to them in all the Scriptures the things concerning Himself" (27), and, in the sermon, McCurdy suggested some of the scriptures that the Lord might have talked about with the disciples. George McCurdy is well known for his great study guides to the minor prophets (which are all available for free at dovepress.org) and many of the scriptures he talked about were from the minor prophets. You can hear his knowledge and love for these lesser known scriptures in his explanation of them.

In the sermon he also talked about the importance of reflection (read a previous post about reflection) and he wrapped it up in a way that I found really hopeful and inspiring. I'll stop describing it now and let you just listen to it.
Posted by Malcolm at 7:48 PM 2 comments:

A while ago Freya Fitzpatrick, who is working on a new, critical edition of the Latin text of True Christian Religion, sent me a parallel passages spreadsheet (.xls) that she put together. I've now finally figured out a way to make it available to people online.

Here's Freya's introduction to the document:

This is not a complete or definitive listing of all possible parallel passages. These parallels have been compiled over many years by different people for use in a variety of specific works. I have simply transcribed their work into a database. There may be other sources of parallel passages I am unaware of and have not included. There may be books of the Writings for which no-one has yet researched parallel passages. I have not checked for the original accuracy of the parallels. If someone else says a passage is parallel, I have taken his word for it. Nor have I checked the accuracy of my typing. So, please pardon any errors.

Now all we need is for someone to incorporate this into one of the search engines.
Posted by Malcolm at 4:54 PM No comments:

The Heroic Fight Against Lust

I just read a great short post by Solomon Keal about fighting lust like a hero fights a dragon, titled "The Husband, the Princess, and the Dragon." It's realistic and inspiring.
Posted by Malcolm at 5:43 PM No comments:

Email ThisBlogThis!Share to TwitterShare to FacebookShare to Pinterest
Labels: blog

Just going to sneak into the lowest heaven?

In class today we were talking about how people sometimes joke that they're just going to sneak into the lowest corner of the lowest heaven. Theolog Pearse Frazier made the good point that thinking this way involves thinking of heaven as a destination rather than as a state. He said that what we should think instead is "how can I live in a heavenly way today?"
Posted by Malcolm at 5:57 PM 1 comment:

Last summer Rev. Ethan McCardell moved out to Seattle to plant a church. You can hear about what they're doing out there on two web sites.

Seattle New Church Project (ncchurchplant.blogspot.com) is a blog site that mostly has newsletters on it. Recently their official congregational web site launched. The name that they're using for their church is Light for Life New Church and so their URL is LightForLifeNewChurch.org. Looking around this site it looks they're still filling in a few of the gaps—for example, there's a note on their sermons and media page that says that recordings of their services will be coming in May—but it's still fun to see what they've got so far.
Posted by Malcolm at 3:42 PM No comments:

In Heaven and Hell class today Rev. Andy Dibb pointed out that there are a couple of buildings that have some similarities to the Temple of Wisdom that Swedenborg describes in True Christian Religion 508:1-2 and True Christian Religion 387:2. The two best examples that I could find were Chiswick House and La Rotonda. Do these pictures look to you like these two descriptions?

One day there appeared to me a magnificent temple, square in form, the roof of which was crown-shaped, arched above and raised round about; its walls were continuous windows of crystal; its door was of a pearly substance. (True Christian Religion 508:1)

In form it was wonderful. It was elevated high above the ground; it was four-square, with walls of crystal, a gracefully-arched roof of transparent jasper; and a substructure of various precious stones. The steps for ascent into it were of polished alabaster. At the sides of the steps there appeared figures of lions and their whelps. (True Christian Religion 387:2) 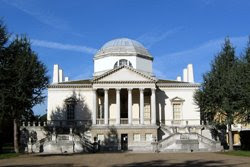 Posted by Malcolm at 7:24 PM No comments:

Email ThisBlogThis!Share to TwitterShare to FacebookShare to Pinterest
Labels: passage

Last night at the Sunday Night Thing Rev. Grant Odhner gave a talk about discouragement. He focused on the story of the bronze serpent from Numbers 21:4-9 and talked about how when we're discouraged it's often because we no longer feel delights in higher things (the people loathe the manna) and so we try to make up for it by finding other things to make us feel good (the Lord sends fiery serpents that bite the people). Maybe that doesn't sound all that compelling the way I put it but it really resonated with my experience of discouragement and I really liked Grant's explanation of how the Lord healed the people from the serpents' bites. If you want to know what it is you'll just have to listen to the talk.

During the talk Grant brought in selections from Arcana Coelestia 995 and 997 and John 3:1-17, where Jesus refers to the story from Numbers.
Posted by Malcolm at 2:38 PM No comments:

Last Sunday Thane Glenn gave a talk on compassion at the Sunday Night Thing. I missed it because I was out of town but someone recorded it so I just listened to it this afternoon and it was really useful to me.

The main passage he was working from was Arcana Coelestia 6737, which is just a great passage. Thane really brought it to life by touching on lots of cool examples of compassion from the Old and New Testaments. He suggested a useful approach to trying to be more compassionate but what I particularly appreciated was how, at the end, he talked about the Lord's compassion and mercy.
Posted by Malcolm at 8:38 PM No comments:

I'm a little ridiculously excited to announce that I've added a Recent Comments gadget to New Church Thought. This means that you can now see what people have been saying recently. For example, in the last week, Chuck Ebert, who is in charge of HeavenlyDoctrines.org, commented on the search engine review with some details about the difference between the online and desktop versions of the STAIRS project; Alison Longstaff commented on "What to do when the New Church is Accused of Being a Cult" that perhaps people have a point when they accuse the General Church and Nova Hierosalyma of being a cult; and Kertus Jildes commented on the post about Curtis Childs' radio show that the show was the "Best thing to come out of the twenty-first century so far. Period."

So if you're interested in what's being said or want to join in the conversation, look for the Recent Comments gadget on the right-hand side of the blog.
Posted by Malcolm at 7:09 PM No comments:

Last night Rev. Mac Frazier gave a great talk about doubt at the Sunday Night Thing. It was part of the current series, "Feelings: What the heck? - Emotions and Spirituality." His main text was Arcana Coelestia 1820, which is a great passage about how the evil spirits attack what we love.

The exciting thing is that I finally remembered to bring my digital recorder to the service so, if you missed it, you can listen to Mac's talk online. At the Sunday Night Thing the readings are done by people in the congregation so if you're having trouble hearing those you can read along with them by clicking on the link to the Arcana Coelestia passage above.
Posted by Malcolm at 3:46 PM No comments:

Jason Schnarr has recorded an album based on New Church teachings about the 7 days of creation called "7 Days." On Saturday Jason was on Curtis Childs' radio show on WXOU.org (the radio station of Oakland University) to talk about the album. In the course of the hour-long show they talk about what inspired Jason to make the album, what's going on in the different tracks, spiritual rebirth, and rockin' music. If you're a fan of Jason and Curtis you'll have a great time listening to them hanging out. They also listen to the entire album.

If you're familiar with Jason's previous work with bands like Human this album will sound familiar. But this album also has a lot more to it—there are hard rocking tracks but there are also more reflective tracks; there's electric guitar and drums but there are also strings, flute, and bells; there's angst but there's also quotes from the Old Testament and terms from the Writings woven in. It never gets too theological: the lyrics are obviously influenced by Arcana Coelestia's explanation of the days of creation but it's translated into everyday thoughts and language. I particularly enjoy Jason's Glen Hansard-like willingness to sing at the top of his lungs and the often hauntingly beautiful vocal harmonies provided by Heidi McCardell.

To listen to the show go to CurtisRadio.com and click on Curtchives and look for "Jason Schnarr CD release," click play and fast-forward to 3:37. Or, you can listen to 4 of the tracks on Human's MySpace.
Posted by Malcolm at 9:44 PM 1 comment: