What happened was in 2006 King's library was sold at an auction to Morehouse College in Atlanta. During the auction some of his books were displayed, one of which was Emerson's A Modern Anthology. Edward R. Bosley (a director of a National Historic Landmark) was at the auction and he found this written on the front page:

Bosley assumed that this was written by King and told others and the news spread. However, in February Rev. Ray Silverman, chaplain of Bryn Athyn College, contacted the people working with the collection and received this response from Courtney Chartier, the Processing Archivist:


Dr. King’s volume of Emerson does have extensive notes on Swedenborg. However, the handwriting is not his. There is an inscription that reads “Rev Wm Fairfax (colored) Swedenborgian minster”, with an address in New York. He is the likely author of the notes.

So that's the news. It's disappointing but it's good to have the facts straight. I suppose that there's a chance that as they analyze the collection more they'll find other things to connect King and Swedenborg but for now we can't say that Martin Luther King Jr. was inspired by Swedenborg. ---

Thanks to Jim Lawrence we now have a picture of Rev. William Fairfax and his wife, taken at the 1959 General Convention. Jim also did a little more research about him and found this much out:


William E. Fairfax was ordained by Convention in 1937 and he served until his death in 1964. His church was in Harlem. .... Basically, what we know is that he probably identified in important ways with MLK, and thought he might interest MLK in his favorite theologian as a fellow "colored" Christian minister in the U.S.

I also asked Jim where someone should start if they were interested in doing more research about Rev. Fairfax. He said, "Someone wanting to dig further on Fairfax would probably best start in our own collection here in Berkeley and the archives in Boston associated with our headquarters, which keeps a lot of records on the various societies past and present." 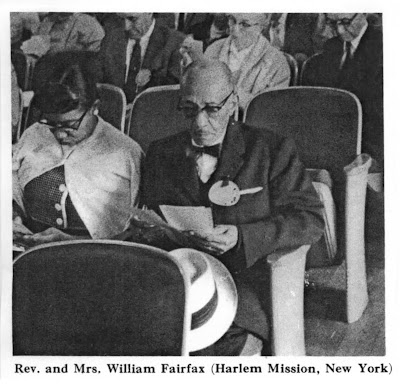 Email ThisBlogThis!Share to TwitterShare to FacebookShare to Pinterest
Labels: news

As a Swedenborgian myself, I am now perhaps more interested in Rev Wm Fairfax than in MLKJ. I wonder who was Wm Fairfax?

Ditto, Pearse. Though I am still interested in MLK and always will be. But who was Fairfax?

I contacted Courtney Chartier to double-check if it was fine with her for me to quote from her email to Ray Silverman. (And it is.) I also asked her if it would be possible for her to send me a scan of the page of the book we're talking about and she sent me this reply and invitation that I want to pass along to anyone reading this:

Unfortunately, providing a scan of the work is problematic. Although Morehouse College owns the collection, and the library is the custodian, copyright is still maintained by the King Estate (PDF). At this time we cannot offer copies, or publish images of, the annotations in that volume.

However, the Morehouse College Martin Luther King, Jr. Collection is open to the public for research, and we invite you, and other Swedenborg scholars, to view this volume at the Woodruff Library.

If anyone does visit the collection and see the book or anything else interesting, please leave a comment with a description of your experience.

I feel like I saw an actual photo of the notation in question in a scholarly context, but can't remember where...

I am much more fascinated that there was an African-American Swedenborgian minister named Rev Wm Fairfax. The New Church in the USA has seemed to me to have remarkably little diversity... it would be great to know more about this man and his work.

hello who ever made the statement thier is little diversty in the new church was wrong thier is plenty of blacks that read swedenborg in all humbleness you talking to one.

I just by happenstance found a photograph of Rev. Fairfax and his wife in a 1959 copy of The Messenger (Convention publication). They are in attendance at the annual convention in the photo and are described as from Harlem. Anyone wanting to follow this up may contact me: jlawrence@psr.edu

Fairfax's granddaughter (and I believe Weems's stepdaughter), the Rev. Gladys Wheaton, was ordained as a Swedenborgian minister in 1980. She is now largely retired, but was most recently pastor of the Swedenborgian Church in Newtonville, Massachusetts.

It should also be mentioned that there is a relatively large (by Swedenborgian standards) New Church in South Africa, and smaller ones in other African nations such as Ghana and Nigeria.

Whether Rev. King was inspired by Swedenborg, or whether he mirrored him by accident, it is indisputable that at least some of Rev. King's philosophy is strikingly similar to Swedenborg's. For instance, this statement, "Every person must decide, at some point, whether they will walk in the light of creative altruism or in the dark of destructive selfishness. This is the judgment. Life's most persistent and urgent question is, 'hat are you doing for others?'" certainly parallel's Swedenborg's thoughts.

Get New Posts Emailed to You